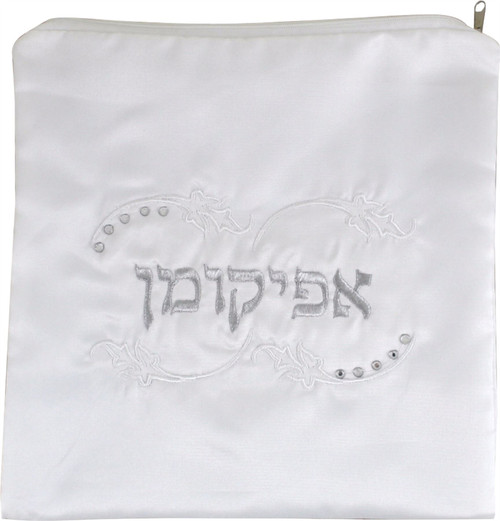 The "Afikoman" in Hebrew means "that which comes after" and is a piece of matzah that is broken in the early stages of the Passover Seder and "hidden" by one of the family members to be found later and set aside to be eaten after the meal.

According to Jewish tradidtion, the afikoman is a substitute for the Korban Pesach, the Passover offering in the Temple which was customarily the last thing eaten at the Passover Seder during the periods of the First and Second Temples.

This is a special "Afikoman" satin fabric cover that includes an inscription in Hebrew and contains a pocket for placing the matzah that is to be "hidden" during the Jewish Passover Seder.

Afficoman, half of the middle matzah of the three matzos placed on the Seder table "on the night of Passover.